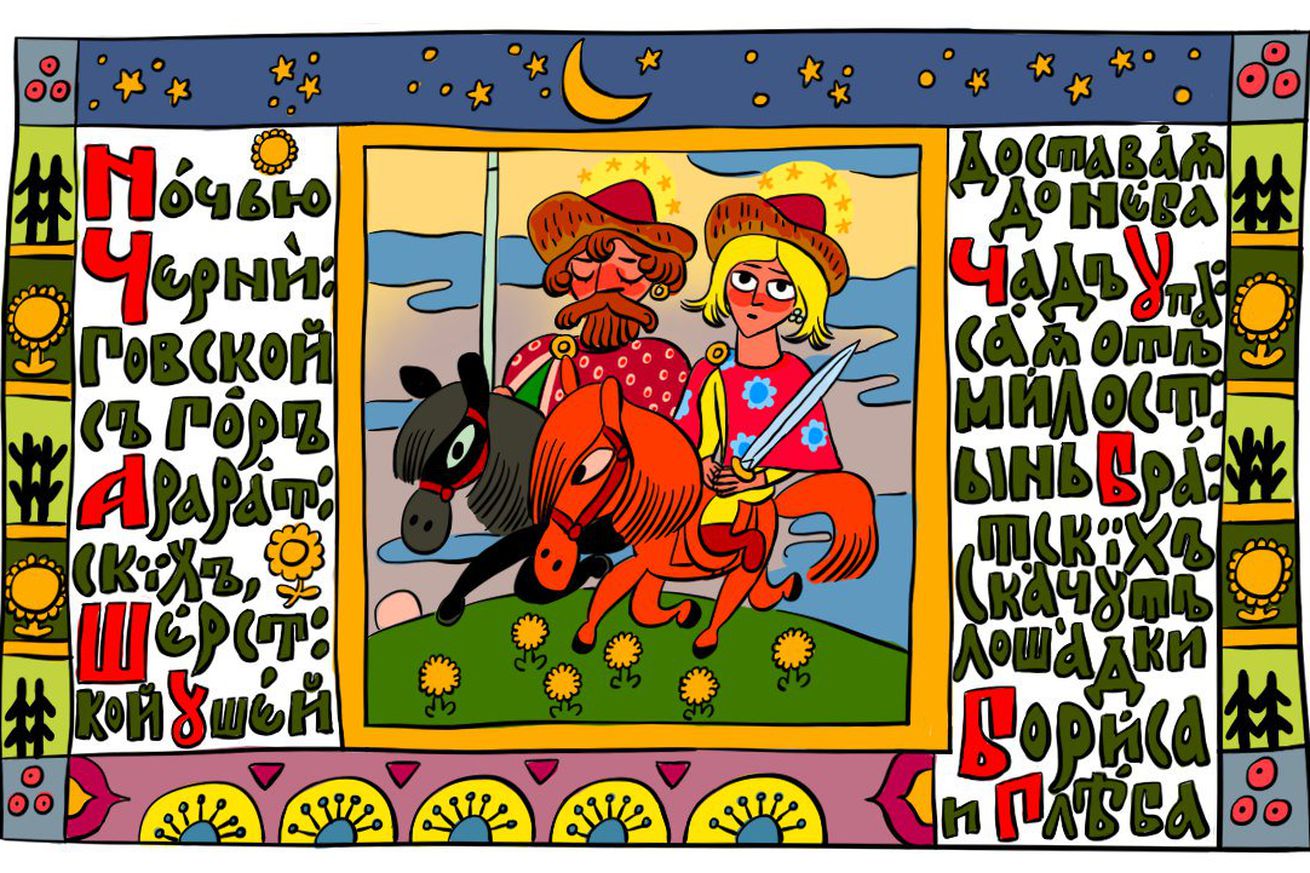 Moscow-based artist George Mager has such a familiar style that it feels like you’ve stumbled upon it before in an old Japanese manga or maybe in a vintage children’s book of fairy tales you picked up from a dusty corner of the thrift shop. But all the while, his art is instantly recognizable as his own, with soft, bouncy lines that outline friendly, lumpy characters that look like they’re made of putty. The freelance artist has applied his playful style to comic adaptations of cartoon series like Uncle Grandpa, Gumball, and Over the Garden Wall, and he has also worked on character explorations for Netflix’s upcoming animated series Centaurworld.

To follow Mager online is to be kept on your toes. He regularly puts original artwork up for auction on his Instagram, and followers can bid on them for 24 hours by tagging the last bidder in the comments. His comics also consistently surprise and delight, in that you never know which language it’ll be written in. One day, he’ll post a comic with the characters speaking French, and the next, they’ll be speaking Japanese. It’s hard to keep count of all the different languages he’s incorporated into his artwork — like Korean, German, Russian, Catalan, and Chinese, just to name a few examples. I talked to Mager about the joys of playing around with language, why Instagram auctions are great for pricing art, and getting inspiration from milk cartons.

This interview has been lightly edited for clarity and brevity.

How many languages do you speak? And how long have you been learning?

I have Russian as my native language, and I guess I understand English rather well. At school, I had to study German for six years. And at the same time, I took Japanese classes for a couple of years. Now, I understand I like the cultural aspects the languages have more than studying them, more than grammar. I like the words and meanings and those historical and cultural features that give the language its savor. And now, with internet and many online dictionaries and textbooks, having the text you need translated in any language is rather simple. I’m proud I managed to make a little comic this winter in a language that only has several thousand speakers and maybe would encourage somebody in studying.

What’s your favorite language to draw?

I guess writing / drawing hangul (Korean) is my favorite. I also love the old Chinese seal script for its softness and roundness, and it also always reminds me about the calligraphy school from the film called Hero. As for comics, I usually do simple lettering (and sometimes I cheat and use the font I made when I’m too lazy to do the text).

first 30 pokemons from generation 1
(and i will remind you about my patreon againhttps://www.patreon.com/smartyfarty )#Pokemon 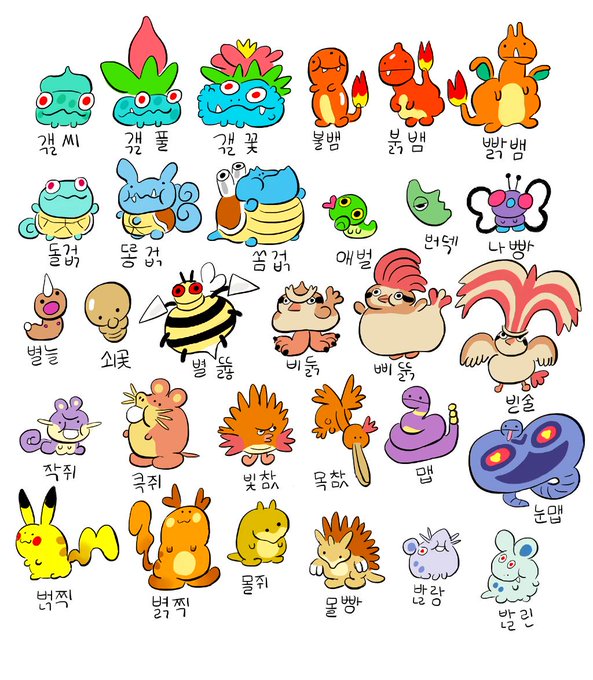 1,827 people are talking about this

I love how you put together Korean characters in ways that might not necessarily be correct but is totally charming. What’s your process for this? Have you heard from native speakers on what they think of your use of Korean?

Thank you! Actually, I had learned about Korean script before I learned the language basics, and I fell in love with the language. And also, all of the Koreans I met have been super nice. I love to study old and dialectal words. I’ve been doing sketches for a little project of a pictorial dictionary of those words. And I also like the graphic appearance of it and how one can construct a character from basic elements. That’s marvelous from the designer’s point of view. That’s why I sometimes tend to do incorrect combinations, which are more design than language. As for the response, only once was it kind of negative. Someone wrote something like, “Does he think it’s funny to write such nonsense?” The other response I’ve been getting is so positive. Some people even thank me.

The way you do art auctions on your Instagram comments is really interesting! How did you get the idea? Is it a good system?

It was born so spontaneously! I drew my first auction picture about two years ago and decided to sell it with such a method. And from then onwards, it’s my favorite way of art dealing. I like it way better than doing commissions. And one more thing is that if I’m having problems setting prices for my pictures, it’s easier for me to let the people do it themselves.

I love how everything you draw looks so bouncy and plump. How did you develop this style?

I guess plumpiness and roundness are so natural, so I draw everything round and childishly unintentionally. And as the years go by, I do it more and more. I think I always loved the freer and more cartoony approach in art, and being surrounded by serious art, I must admit, it has been quite a struggle asserting my silly world view and art view.

What are your influences?

I think my biggest inspirations are still comics and cartoons from the 1930s till ‘60s and everything from political cartoons and milk carton designs to postwar cheap Japanese and Korean comic books. They are the best.

What did you study in school?

From age 8 till 11, I attended an art school, and in university, I studied animation directing for three years but quit my university after that. Unfortunately, I cannot say my studying there was a happy or a very useful one.

To be honest, I’ve never tried full-time jobs, so I have nothing to compare to. But doing freelance jobs is a nice thing, especially when I enter the right mood, when work goes smoothly and easily.

did a corean clarence commission for @srothbell 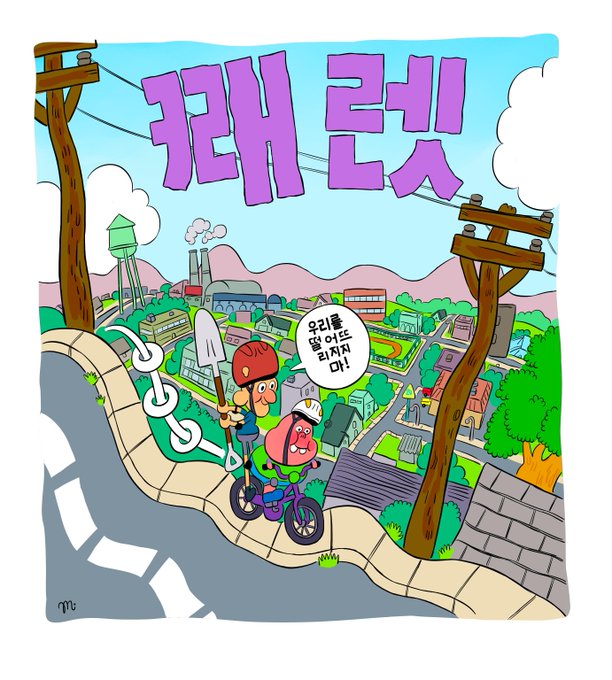 47 people are talking about this

You describe yourself as a folk artist. What does this mean to you?

When I coined that title for myself, I meant the importance of various folk and traditional cultural elements for myself. My favorite themes are historico-ethnic. I’m happy to think that my work can add something new and fresh to the big and mighty river of history. I love to make adaptations of classical legends and stories, all that folk and mythological stuff, and I feel myself like an ancient rhapsode a bit — a person who takes the story, the concept, and handles it like a potter who holds clay in his hands.

What’s your dream job or project?

Nowadays, I’m not a very “animation” person. I’m more into comics and illustration. I have some comics in progress, so finishing them and drawing them as fun and as good as I can is my dream.