Paper Beast is a VR game that turns big data into a peaceful, ethereal world 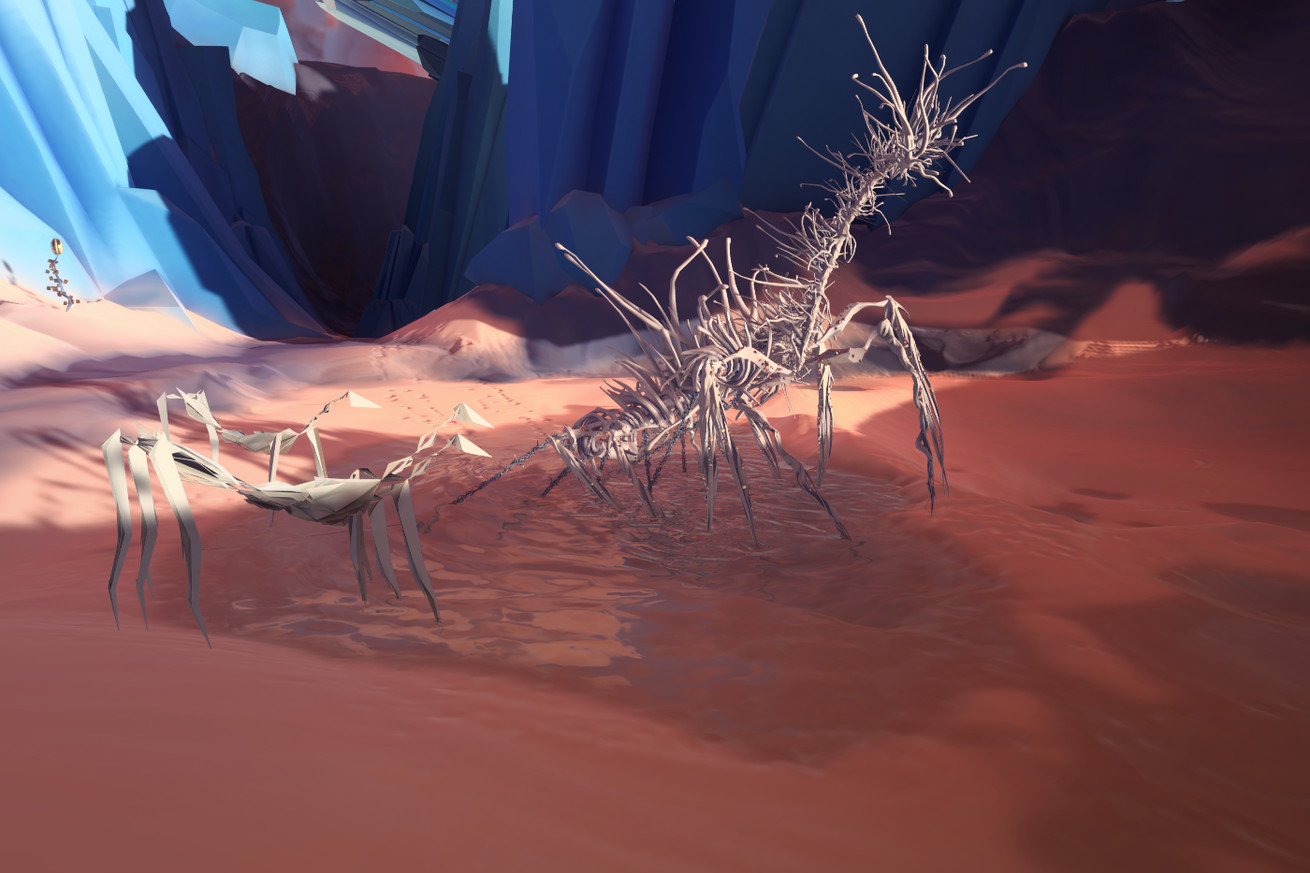 The latest from Another World creator Eric Chahi

The Japanese art of origami is inextricably intertwined with mathematics, as documented by Robert J. Lang in his 2003 book Origami Design Secrets. The art form is based on the transformation of a flat sheet of paper into a rough-edged but innately elegant representation of an object, with the most illustrious example perhaps being that of the paper crane. For legendary game designer Eric Chahi, best known for Another World and Heart of Darkness, paper is innately comparable to the mesmerizingly mysterious world of big data. To communicate this, Chahi formed a studio called Pixel Reef in 2016 and began work on his latest project: PlayStation VR exclusive Paper Beast.

“The idea came after a desire to create a game about wildlife,” Chahi tells me over the phone. A few weeks beforehand, I demoed Paper Beast at Gamescom 2019, traversing its wonderfully rich world in virtual reality where data has fostered a unique ecosystem by recompiling itself into artificial life.

In Paper Beast, you play as a VR user exploring this data-derived world, meaning the game is experiential, even meta. From what I played, your task is to discover all kinds of strange anomalies formed from chunks of data, some of which are primal but sentient paper beasts. The fact that none of it makes sense right away is what makes it special: it’s an utterly weird world composed of code, but it feels strangely alive. In fact, it is alive.

Chahi explains that he conceived the core idea for Paper Beast quite some time before he began developing the game. For him, the idea was spinning around his head “like a satellite rotating around that has to connect things together.” The modern world sees an abundance of information existing in virtual space, perpetually rebounding from one point to another. “Today, we have a lot of data everywhere, and we are ourselves too much in the flow of information, like email,” he explains. “There’s so much information everywhere.”

Chahi knew this could make for an innovative and intriguing thematic base for a game, but he was unsure of how to realize his vision and connect the dots. From the first prototype, he was set on juxtaposing paper with big data and creating a world teeming with unique flora and fauna. “It’s not realistic, but there’s a connection to data,” he tells me. “The first use of paper is to write on it, which strongly connects it to data, [because] it’s a connection to information. So why not create a universe born out of big data?”

Chahi had a starting point, but he knew he needed to push the envelope further if he wanted to successfully create a data-derived, self-sufficient ecosystem. “When you’re in the game, it might seem a bit realistic,” he explains. “But there is some kind of glitch or anomaly everywhere, like the cloud or later in the sky and in the storm. And these animals are made of paper or some strange materials. In the game, you should feel the pressure of big data, which is born out of data. But sometimes there’s an intrusion in this world, which is not always super cool for these animals.”

Before long, however, the poetry within Paper Beast becomes startlingly clear. Conceptually, it’s an experimental project in both game design and AI philosophy, but it’s also deeply rooted in the way we consider nature in contemporary life. As Chahi puts it, “It’s difficult to get out of the flow [of data],” which is why the juxtaposition of real and digital worlds becomes so quickly and poignantly affecting.

However, this is more of a thought experiment than a prediction. “It’s a metaphorical idea,” Chahi explains. “I think if it happened, it wouldn’t be like Paper Beast. It would be something super different. If something emerged from the consciousness of some computer and could pick up parts of what we put in it, we can imagine some image [of that]. But we don’t know. I think with AI, we’ll be super surprised in 20 years, or maybe less. We keep learning. It’s sometimes super scary.”

Within the world of Paper Beast, a plethora of curios and anomalies exist in harmony with one another. However, one particular creature, which serves as your guide in this strangely sublime sphere, stands out among the rest as not only sentient, but peculiarly intelligent. You can puppeteer the smaller beasts, picking them up with your meta powers as they contort into a ragdoll state, before gently placing them down to resume their grazing on corporeal chunks of data. But this bigger creature cannot be controlled, only understood.

“This one is super mysterious,” Chahi explains, “because that creature is the first connection between the Paper Beast universe and the player. It’s the creature that is most conscious of the player. Why is this the case? It’s a mystery. But later in the adventure, you’ll meet this creature again.” Cryptic, but thus is the nature of a data-born microcosm bustling with strange and unintended life.

“It’s an engine inside an engine.”

Chahi wants players to experience the joy of discovery when this creature tentatively greets them and begins to showcase its digital domain. He wants those who venture across his world to recognize that it’s steeped in its own miracles of life, which are simultaneously mysterious and peaceful and, on occasion, anxiety-inducing.

“The most important thing is the interaction with Paper Beast’s universe, feeling that it’s alive, that it’s really autonomous and these creatures have their own behaviors,” he tells me. “It’s like the pleasure of discovering a world not only by seeing it, but by interacting with it and touching it and living something unique and exceptional. Sometimes in life, you go to a mountain, and it’s sunny. Then, suddenly, there’s a storm, you get some rain, and you have to go somewhere. But it’s a surprise. And when you remember this, it can be a good memory because you lived something intense and beautiful at the same time.”

In Chahi’s eyes, this Classical idea of sublimity lies at the heart of Paper Beast. “Some games are poetic,” he says, “but Paper Beast is poetic in every aspect.” However, Chahi’s game is literally embedded in poetry to the extent that it’s built with an engine designed not only to create it, but to set a precedent for its entire purpose. “There is Unity, and inside Unity, there’s another engine,” Chahi explains. “The one we developed because we did our own physics, and 95 percent of the rendering is our rendering. It’s an engine inside an engine.”

The primary reason Chahi designed his own engine was to make Paper Beast compatible with VR systems. According to him, virtual reality demands a massive amount of tuning and optimization that his team couldn’t achieve with Unity proper “because Unity is a black box, and sometimes we can’t do everything we need to do.” This is where the poetry hits home. “Internally, we call [the engine] Atoll,” he explains. “We named it Atoll because we wanted the development environment to be peaceful to create. And it’s the same philosophy for Pixel Reef. Pixel Reef as a company is just a place for creative people to be peaceful and create something together.”

“Some games are poetic. But ‘Paper Beast’ is poetic in every aspect.”

For those who don’t know, an atoll is a circular reef encompassing a lagoon where the actual coral often rests upon an extinct volcano submerged deep beneath the water. Interestingly — and, paradoxically, beautifully — the atoll can only exist so long as a slow rate of erosion allows it to gradually increase in size, combining decay with growth and destruction with creation. This idea echoed through the conclusion of my demo where a cataclysmic storm began to inhale chunks of data into an unknown abyss. As a means of rescuing you from the encroaching danger, your mysterious guide escorts you to a dimly lit cave before confining you to darkness by pushing a boulder in front of the entrance, locking you in but sheltering you from the storm. It’s entirely nonverbal, but it’s incredibly raw and emotional, creating a link between you and the unorthodox virtual world of Paper Beast.

“It’s always a pleasure to speak about your games,” Chahi tells me before we say our respective goodbyes. “If you have time, I have time.” His parting words perfectly symbolize his passion for this wonderfully weird world of data fostering life where your meta performance as a PSVR player is designed to cause you to question your sentiments about real life. It’s a world where code becomes a sort of life force. And by the end of it, the lines between reality and big data begin to blur, and what was once artificial becomes real, powerful, and deeply affecting.