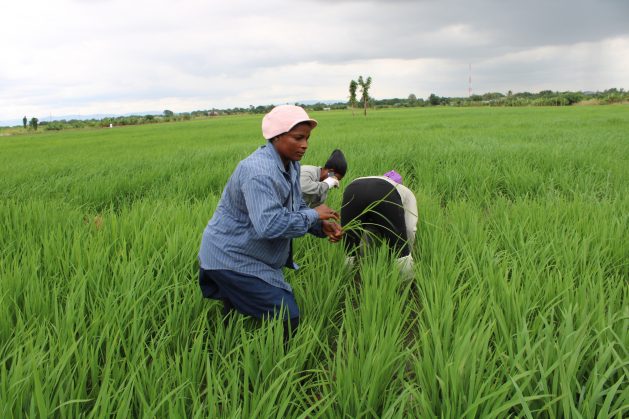 Women rice farmers in a field, Accra, Ghana. Through the African Development Bank’s Feed Africa project, 19 million people were provided with improved agricultural technologies, and almost 1.54 billion dollars was approved in 2018 to transform agriculture on the continent. Credit: Busani Bafana/IPS

JOHANNESBURG, South Africa/BULAWAYO, Zimbabwe, Sep 16 2019 (IPS) – Arama Sire Camara, a fruit and vegetable seller in the province of Kindia, some 135 km from the Guinean capital of Conakry, feels safer trading well into the night thanks to the Rural Electrification Project, financed by 21-million-dollar investment by the African Development Bank.

“With lighting on the road at night and illuminating our goods, it means we are safer, especially with all the cars on the road. You can work for longer after nightfall, and so we can make more of our products,” she says.

Shuaibu Yusuf, a farmer from Nigeria, can now not only afford to pay for the food for his family thanks to his high yields that are resultant of the high-quality fertiliser he is able to access through the AfDB programme, Feed Africa, but he can also pay his children’s educational costs and his family’s medical bills.

In South Africa’s Limpopo province, Sarina Malatji, now a 39-year-old mother of three, grew up in an area where access to education was limited. But thanks to investment from AfDB in the state power utility Eskom’s Medupi Leadership Initiative and the Eskom Contractors Academy, her life now is a far cry from her childhood. She is now the owner of her own cleaning business – Green Dot – which currently employs 115 people at the Medupi power plant, one of the largest energy projects in the country. She says the skills she learned through the leadership initiative helped her grown her business.

These are just the stories of a few people who have been the beneficiaries of investments made by the AfDB across the continent.

From supporting the construction of a 563 km power transmission line in Mozambique as part of a commitment to aid post cyclone Idai recovery through restoration of livelihoods and infrastructure; to singing a 28.8-million-dollar grant deal with Somalia for road and water projects; to signing a 4.8-million-dollar grant with the African Union for a continental free trade secretariat; and to committing to pool its resources with other stakeholders to counter food insecurity on the continent. This year has already seen the AfDB make a huge footprint in terms of development.

“Africa will develop not through aid but through the discipline of investments,” AfDB President Akinwumi Adesina said, noting that the bank and partners had launched the Africa Investment Forum in 2018, which raised 38.7 billion dollars in investment deals.

But as the AfDB wrapped up the 20th annual meeting of world’s leading financial institutions last week at the bank’s headquarters in Abidjan, Cote D’Ivoire, plans are underway for a renewed push for Africa’s development as the bank lobbies for a general capital increase from shareholders.

The bank is committed to assisting Africa tap into its potential to be a competitive global investment destination with Charles Boamah, senior Vice President of the bank, citing talks around the general capital increase, stating that “this is a pivotal year, a year in which very, very important decisions are being made about what kind of bank we want to have for the next 20 years.”

At the time Adesina welcomed the announcement saying it was a “huge boost”. He said that it would allow the bank to “strengthen its Triple A rating and increase lending to member countries while discussions are ongoing among all shareholders for a general capital increase.” Canada has been a member of the AfDB since 1983 and is the 4th-largest shareholder among the bank’s non-regional member countries.

Adesina was in Japan at the end of August to attend the Tokyo International Conference on African Development (TICAD) where he told Japanese companies, “Africa presents a compelling return for investors”.

The AfDB is upbeat about Africa’s economic growth, which it has supported through various funding services availed to its 54 regional member countries.

In 2018, Africa recorded real GDP growth of 3.5 percent, the bank said in its 2018 annual report. This is a positive development for harnessing new investment on the continent.

The bank said 17 African countries achieved real GDP growth higher than 5 percent in 2018, and 21 countries showed growth between 3 and 5 percent. Only five African countries recorded a recession in 2018, down from eight in the two previous years. Six of the world’s 10-fastest growing economies are African nations, which include Burkina Faso, Côte d’Ivoire, Ethiopia, Libya, Rwanda, and Senegal.

According to the bank, some non-resource-rich countries had high growth rates in 2018, including Côte d’Ivoire (7.4 percent), Rwanda (7.2 percent), and Senegal (7 percent), supported by agricultural production, consumer demand, and public investment.

Economic fundamentals in most African countries continued to improve, the bank said, attributing this to fiscal consolidation and massive investments in infrastructure, major inroads in financial innovation, increased domestic demand, and substantial improvements in the investment climate.

Convinced of Africa’s strong economic growth potential, the bank has continued to invest in various sectors. In 2018, the bank approved lending worth 9.95 billion dollars under its High 5s programmes — five programmes that focus on key sectors:

“By any measure, these numbers and impacts are impressive,” said Adesina. “But the needs in Africa are enormous. That is why the bank is engaged in discussions with its shareholders for a General Capital Increase to do much more for Africa—toward Agenda 2063.”

Despite Africa’s GDP growing by an estimated 3.5 percent in 2018, the continent’s economic growth is threatened by domestic risks such as climate change, security and migration concerns, increasing vulnerability to debt distress in some countries, and uncertainties associated with elections and political transitions, the bank said, recommending significant private sector investment and external funding  in regional infrastructure and financing.

On average, Africa’s fiscal deficit declined from 5.8 percent in 2017 to an estimated 4.5 percent in 2018, while inflation fell from 12.6 percent in 2017 to 10.9 percent in 2018. However, the bank lamented that these growth rates remained insufficient to address the persistent challenges of high unemployment, low agricultural productivity, inadequate infrastructure, and fiscal and current deficits as well as debt vulnerabilities.

Although tax revenues and spending efficiency have improved, domestic resource mobilisation has generally remained well short of potential, said the bank, noting that 16 African countries were classified as being in debt distress or at high risk of debt distress at the end of 2018. The bank urged the strengthening of the debt-investment links to ensure a high social return on debt-financed public investments.

“I am optimistic about Africa’s future. I am confident in our capacity as a Bank to make a greater impact on the lives of millions of people across this beloved continent we have been called to serve,” Adesina said, adding that, “We need universal access to electricity. We must help make Africa self-sufficient in food. We must fully integrate the continent. We must industrialise the continent. And we must improve the quality of life for the people of Africa.”