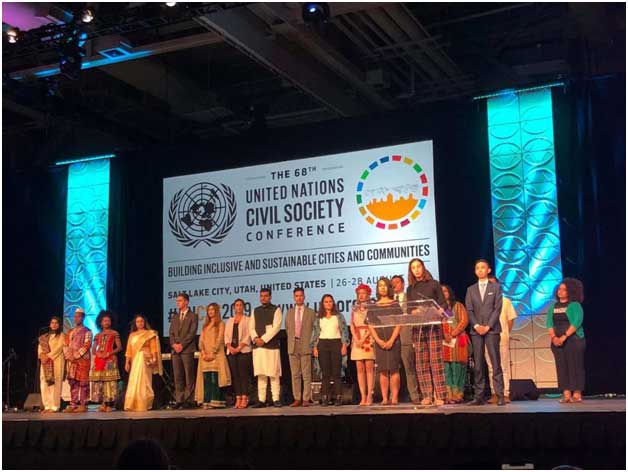 The annual UN Civil Society Conference, which had been meeting mostly in New York, site of the UN world headquarters, and in some foreign capitals, was hosted by Salt Lake City’s Mayor’s office August 26-28 under the title “Building Inclusive and sustainable cities and communities.”

More than half of the current world population of 7.7 billion now live in cities big and small. The UN has projected that the world population will reach 9.7 billion by 2050 and 5 billion of them will be in living in urban areas. Megacities of 10-20 million people each will be even bigger.

The conference adopted a lengthy outcome document that pledged to implement one of the 17 Sustainable Development Goals (SDGs), which calls for focusing on cities and human settlements throughout the world buffeted by climate change, insecurity and economic problems.

The document urged all stakeholders “to enhance inclusivity and respect for the dignity of all, from which human rights originate” and “to work to remove unjust systemic barriers to success, noting that bias and discrimination marginalize and segregate large segments of society.”

It urged stakeholders to “apply conscious inclusivity and respect for human dignity and rights in our daily lives while advocating for similar efforts in our corporate and organizational lives, in our laws, regulations, policies, and practices, and in our economy.”

The president of the UN General Assembly, Maria Fernanda Espinosa, praised NGOs for their contribution to strengthen the work of the UN. But she warned that many major challenges have remained unaddressed.

“I encourage you to continue to engage with your governments to ensure that we use these opportunities to put us on the right path, and work in your communities on local solutions and initiatives that have the potential to be scaled-up and replicated.”

Salt Lake City introduced its Youth Climate Compact during the conference, calling for raising awareness in “our own communities about policy that is detrimental to the health of our planet and promote policy which works to confront the main causes of the climate crisis.”

The Youth Climate Compact said an estimated 143 million people around the world will be displaced by climate change by 2050.

The delegation from China was headed by Dezhi Lu, vice president of China Charity Alliance, and chair of the Huamin Charity Organization.

Attendees included a delegation from China headed by Dezhi Lu, vice president of China Charity Alliance, and chair of the Huamin Charity Organization, a non-governmental organization among the dozens of UN-recognized NGOs.

NGOs are the “most powerful part of society” and they can bring inclusiveness and collective sharing in human settlements, said Lu.

“Inclusiveness is a celebration of our diversity,” Lu noted. “The first step of this is communication and mutual learning. NGOs are diverse, open, and peaceful organizations and are therefore in the best position to understand the value and strength of an inclusive society.”

Lu said he spent the last 10 years visiting NGOs around the world and found that inclusiveness and collective sharing are the most important values for the development of human civilization.

Efforts to build and protect cities and human communities come at a time the world, human lives and all creatures and the eco-systems are threatened by climate change, conflicts and a long list of woes that are chipping away the earth’s habitable environments desired by its inhabitants.

The focus on cities and human settlements is one of 2030 Global Agenda for Sustainable Development Goals.

The rural-to-urban migration is expected to continue in some of the most populous countries like China, India and some African countries.

China, the world’s most populous country with 1.4 billion, has acknowledged that 56 percent of its population already live in cities and the urban population is expected to increase to 60 percent by 2020. China’s massive migration to cities has been unprecedented in world contemporary history.