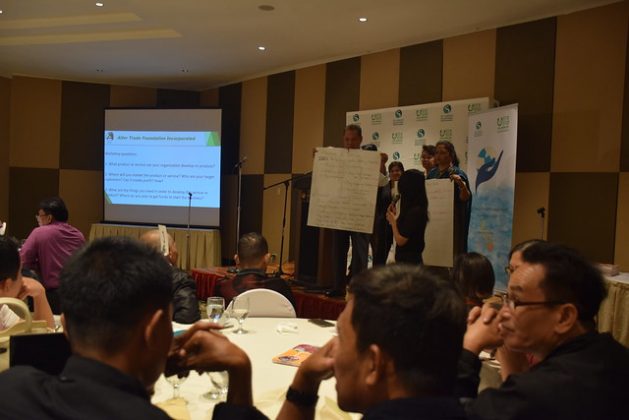 At the first Global Forum of People’s Organizations on Hansen’s Disease, which begun on Sept. 7 in Manila, Philippines, participants present their ideas on entrepreneurship models to attain sustainability. Credit: Stella Paul/IPS

MANILA, Sep 7 2019 (IPS) – Being part of a platform where leprosy-affected people from all over the world can freely interact, exchange and share opinions, ideas, experiences and strategies was always something Tasfaye Tadesse dreamt of.

So this week, Tadesse packed his bags and travelled for 36 hours from his home in Addis Ababa, Ethiopia to reach the Philippine capital of Manila.

The journey was worth it.

Tadasse, the managing director of Ethiopian National Association of Persons Affected by Leprosy, arrived to attend the first-ever global forum for people with Hansen’s disease, commonly known as leprosy. There he found an increasing family.

Participants from 23 countries across Africa, Asia, Latin America and the Caribbean are meeting from Sept. 7 to 10 at the Global Forum of People’s Organizations on Hansen’s Disease.

Organised by The Nippon Foundation (TNF) and Sasakawa Health Foundation (SHF), the forum aims to allow participants to share their common challenges, including a lack of organizational sustainability and capacity to enable them to achieve their long-term goals.

Today, Sept. 7, at the first day of the 4-day forum, Tadesse shared some of the activities and developments that had taken place recently in Africa, including providing feedback on a a regional meeting of all people living with leprosy in East and West Africa.

Held in February, the meeting was the first time that leprosy-affected people from across the continent came together as one community with a common goal of dealing with the challenges they face.

“We only knew about each other until then, but never spoke directly. The assembly brought us together and helped us have a conversation. We came up with a number of ideas and recommendations,” Tadesse told IPS.

One of the recommendations was to not use the word leprosy as it still evokes negative reaction.

“People start to judge the moment they hear the word leprosy, without even caring to find out if the person is cured or almost cured. So, this is clear stigmatisation and its very common everywhere,” he said. 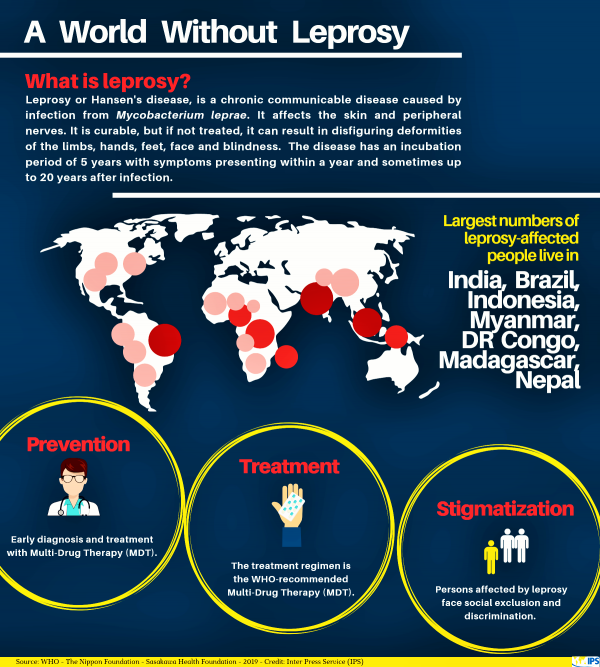 Other recommendations included the African regional assembly deciding to form a social media group for smooth and regular communication among the areas impacted by Hansen’s disease across Africa.

“I didn’t know how to use what’s app before. So after I joined, I felt a sense of accomplishment,” he said. The group first included only the five countries that participated in the African regional assembly: Morocco, Ethiopia, Nigeria, Tanzania and Ghana.

Since February, people from organisations in other countries such as Kenya, Mozambique and South Africa have joined. With the network expanding, Tadesse says it is becoming truly pan Africa.

Lilibeth Nwakaego is a Lagos-based lawyer who has been instrumental in creating and growing the What’s app group across Africa.

“Information is power. So, sharing information is not just about good communication, but also about empowerment of [leprosy-affected] people,” said Nwakaego.

“We now have eight African countries in our What’s app network and I am going to make everyone an admin, so that they can all keep adding new members in their respective countries. We need to take information and ideas out of papers and meeting rooms to the people who need that and this is our way to do so,” Nwakaego told IPS.

The forum participants also learnt of recommendations from Asia and Latin America, regions which had also organised similar assemblies earlier this year. Speaking of the event held in Manila in March, Frank Onde, chairperson of Coalition of Leprosy Advocates of the Philippines (CLAP), recalled how the assembly had highlighted the connection between climate change and leprosy.

“Our participants from Kiribati are suffering more because of climate change. There are now more flooding which is adding to the challenges. During flooding, one must evacuate to higher ground but people who have advanced stage of leprosy cannot do this and so they are suffering. It was the first time that we came to hear about such an issue,” Onde said at the forum.

Foustino Pinto, the national coordinator for the Movement for Reintegration of People Affected by Hansen’s Disease (MORHAN) – an organisation of leprosy affected people in Brazil, shared the highlights from the Latin American regional assembly that took place this April.

One of the biggest outcomes of the assembly was a demand to adopt a higher level of respect and make leprosy affected people central to any policy decision.

“Right now, what we see is that our voices are casually heard and our opinions and ideas are not really listened to. There is a lack of seriousness. Take the term leprosy, for example. Who is deciding how this disease should be mentioned? Not the people living with it! So, we feel that there is a lot of room for improvement here. For us, the most important issues are dignity, equality and respect for the human rights of leprosy-affected people,” Pinto told IPS.

Takahiro Nanri, executive director of SHF, called out for the free flow of ideas and experience sharing among the participants. This would help lead the future course of action to eliminate leprosy, he said.

The participants will also attend the International Leprosy Congress scheduled to take place in Manila Sept. 11 to 13.