Hobbs & Shaw is joyously stupid about science and technology 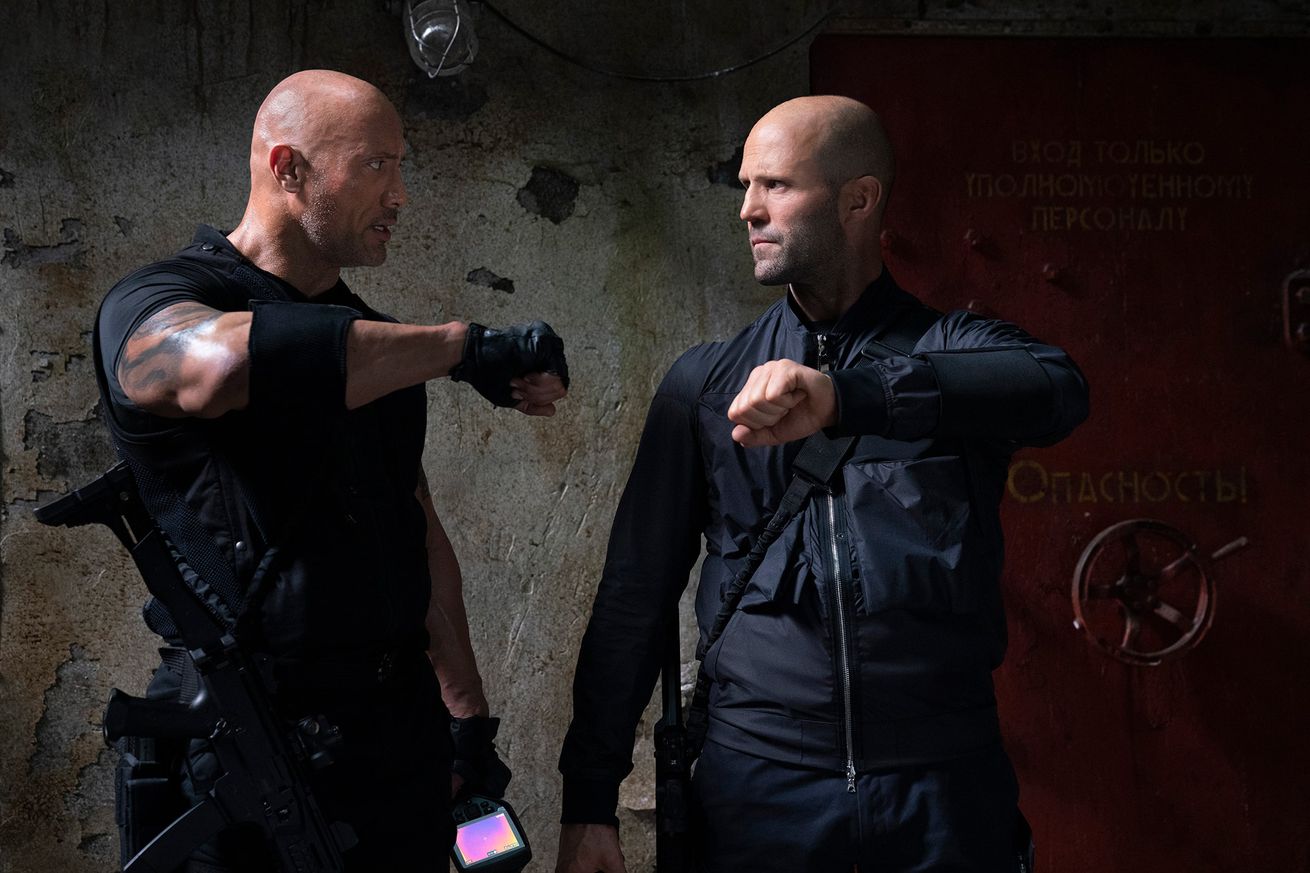 Last week, The Verge’s editorial staff gathered in New York for an annual summit, and we roundly agreed that the only acceptable after-hours staff outing was a trip to see the new Fast & Furious movie spinoff Hobbs & Shaw. The Fast & Furiousmovies have been a longtime addiction for Verge contributors, going back to the days when we created our own F&F Dungeons & Dragons hack and played it for the site. So of course we wanted to see Jason Statham and Dwayne “The Rock” Johnson spend approximately 12 hours of screen time insulting each other’s penis size and basic capacity for punching things. Nineteen Verge staffers watched this film together in an East Village theater, howling with joy and contempt through the whole movie. It was a great time. It was also a dumb film.

In theory, Hobbs & Shaw should be an extremely Verge-friendly movie. It’s a futurist story about the conflict between a group of extreme body-modders who want to jump-start evolution by cyber-enhancing themselves, and a couple of Luddites who prefer to deal with all problems via face-hitting and dick-waving. The story brings in a programmable virus, biometric-locked guns, self-driving vehicles, an emergent bioweapon, sabermetrics as a combat tool, and a whole lot more high-tech ideas. It’s also just hilariously stupid about all of them.

So here’s a question for the Verge staff in attendance: We all collectively got a lot of laughs out of Hobbs & Shaw’s meatheaded yelling about the Dark Web, computer hacking, and secret Estonian bioware dark sites. Is the movie’s fundamental clumsiness about technology, science, physics, and every other aspect of the world a deliberate feature? Is this movie actively joking about how little people understand about the world they live in? More importantly, what was your favorite dumb moment in this film?

Tasha Robinson, film & TV editor: For me, nothing in this film even comes close to being as funny as the line where a flunky casually tells villain Idris Elba that he’s “hacked the mainframe of every major journalistic outfit” and fed them all a false story demonizing grumpy anti-heroes Hobbs and Shaw. Yes, modern media outlets definitely all have central mainframes, and if you hack into them and insert a news story, every journalist in the world will absolutely all run straight to our cameras and parrot that story on the air, yelling J. Jonah Jameson style about the new menace threatening our society. Honestly, it’s a wonder the angry incels of the world didn’t use this tactic to get the worldwide media to condemn Captain Marvel when it was coming out.

Is this a profoundly stupid plot point? Yes. Is it hilarious? Absolutely. The Fast & Furious movies have gotten so casual about even basic causality at this point that I think the audience is meant to be in on the joke. This mainframe-hacking is sloppy shorthand that says, “We know you don’t really care about the details here, you just want another car chase, and leaving our heroes on the run will get us to one.” I just wish the gag had a payoff — the “on the run” plot goes nowhere and is never resolved, not even with a line about how Hobbs and Shaw counter-hacked all those mainframes to get journalists to rescind the false story. (And slavishly praise Captain Marvel.)

Liz Lopatto, deputy editor: The unstoppable super-bioweapon that was going to wipe out the entire world was a point of knee-slapping hilarity for me. How will this organ-liquifying bug escape the backwaters of the Ukraine? “It goes airborne.” Look, I spent a not-insignificant part of my career reporting on infectious disease. Airborne transmission is pretty limited; it requires proximity. The character transporting the virus just needed to be quarantined. But obviously, quarantine isn’t as dramatic as the end of the world.

Absolutely no part of the self-driving motorcycle’s behavior makes sense — Sean O’Kane, one of our transportation reporters, suggested it was a dumb Transformer. I think it’s weirder than that! The motorcycle behaves the same way my hands behave when I’m typing: near-instantaneous movement, exactly how I want. There is no way, given what we know about brain-machine interfaces, that a brain-linked motorcycle could be that sophisticated. Not in 10 years, not in 20, not in 30, and maybe never. But I fucking loved it. A secret society upgraded Idris Elba, and now he’s also a motorcycle.

Sean O’Kane, senior transportation reporter: [Tightens motorcycle gloves.] As the only transportation reporter who went to this screening, I can say there is some basis for a motorcycle that self-balances — BMW, among others, is working on this technology to ostensibly make it harder to tip over on a two-wheeler. [Takes off glasses.] Now, as for the Transformer-y nature of the motorcycle Elba’s character rides, that part seems a little more ridiculous. [Pulls on helmet.] But as Liz pointed out to me after the movie, it’s possible (though never fully explained) that the motorcycle is more like an extension of Elba’s cyborg character, which is even further out into the future, but exponentially cooler.

[Squeezes glasses in through visor. (Seriously, this part of riding a motorcycle sucks. They never tell you about it, though.)] If I were a half-man / half-machine supervillain, it’d honestly be hard to focus on the task at hand if I had a shape-shifting motorcycle that could help me go wherever I wanted. Point is, I’m not sure I’d be cut out for the job of chasing down Hobbs and Shaw and converting them to The Cause, because I’d be too busy doing Wave Race 64-style tricks all over the city. I can’t say that the brain-linked cycle seems super-realistic, even decades down the road. But it was my favorite exaggeration of the tech we have today. [Wheelies away.]

Adi Robertson, senior reporter: Even if the “mainframe” thing isn’t quite a joke, it’s so audaciously absurd that it’s fun instead of wrong. I mean, clearly the Furioverse just works differently from our world! Being almost electrocuted to death is a mild inconvenience, airborne viruses are a global death sentence, and CNN posts its stories from a magic journalism server.

But the real star of the show is inexplicable gun control. The techno death cult Eteon seems to have had a board meeting at some point where the following agenda was discussed:

Rogue AI: Alright, we need to create a virus that indiscriminately kills weaklings around the planet. We’re going to just set it loose and see if the strong survive.

Evil scientist: Cool, we can do that. Also, we have all these guns around, what if we just let people go wild with them?

Rogue AI: No. Guns are dangerous. We must invent a biometric lock system that only allows authorized users to fire the guns to minimize harm.

Rogue AI: Do it, or I will “deactivate” you, because you are an internet-connected device that I can terminate at any time.

Anyway, Hobbs & Shaw was fun. It is also a movie whose gun control sensibilities are less realistic than its impossible physics.

Adi: The gun control makes perfect sense! Guns can unfairly amplify the power of the weak and cowardly, much like Christianity, according to Nietzsche. (It’s canon that Hobbs would know this, given how often he quotes famous writers.) Eteon must make sure that guns only work in the hands of the ubermensch, who have proven themselves worthy by [checks notes] getting shot a bunch and turned into motorcycles.

Ruben Salvadori, director of audience development: Wait, wasn’t this just a remake of Mission: Impossible 2, where Ethan Hunt has to save the world from the chimera virus and he ends up injecting the bioweapon (or the cure? who knows, there were too many explosions to pay attention to the actual plot) into himself, because what could possibly go wrong?

Anyway, the biggest plot twist in cinematic history, the one that really shocked the room, came during the credits: about five minutes of kudos to the Hawaii crew made us all realize that this movie never actually went to Samoa, those people weren’t really the Rock’s family, and the movie wasn’t actually a documentary based on true events. I want my money back. Loved Ryan Reynolds reprising his Deadpool character, though.

Chaim Gartenberg, news editor: I have only one question about Hobbs & Shaw — how does sunrise work in fake-Samoa? I’m asking this honestly, since I have sadly never been on a tropical South Pacific vacation. I was just shocked that the Samoa fight went from “The Rock and family do the Siva Tau by torchlight at the breaking edge of dawn as they face down the army of evil goons” to “that same thing, but in broad daylight” in… less than six minutes.

Is this just a geography thing because this movie takes place in the southern hemisphere? Is the sun, like everything else in this franchise, just faster and more furious due to the excessive use of baby oil and nitrous?

That was basically it, though. Everything else in this movie ruled, and any problem that can’t be solved with explosions and extremely fast cars probably isn’t worth solving. Yes, that helicopter vs. truck battle definitely showed exactlyhow the tensile properties of chain-link towing cables work, and I will hear nothing to the contrary.

Liz: I want to dig into to the computer voice that apparently rules Eteon. I don’t think it’s an AI, as some fans have theorized. I think there’s a person behind that voice. And like the CIA agent who collects Shaw for this mission, and Ryan Reynolds, who collects Hobbs, the computer voice expresses regret that the heroes don’t remember it. I imagine we will find out who’s speaking in the inevitable sequel. If it is indeed Ryan Reynolds, I may very well die of joy. After a giant “I told you so!” of course.

Tasha: Nah. If Eteon’s secret leader was Ryan Reynolds, all those conversations with the computer voice would have been longer and quippier, not to mention faster and more furious. My money’s on Han. He supposedly died all the way back in The Fast and the Furious: Tokyo Drift, but I think we’re going to find out that he’s been uploaded into a disused journalism mainframe, and he’s out to take his revenge on Shaw for killing him and making him miss out on all the parts of this franchise that weren’t abruptly recast as prequels and side stories so he could participate. It’d even explain his obsession with cyberizing everyone. C’mon, a resurrected robo-Han would be far from the most ridiculous thing that’s happened in this series.