For We Are Many (Feature Film) Lovecraft Gothic Horror 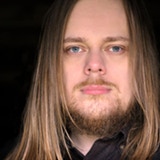 In the midst of battle a King is betrayed by his bodyguard. Clutching his wounds, all hope seems lost, until a mysterious stranger appears with a terrifying offer.

For We Are Many is a horror anthology that features 13 chilling tales, all completely original, and created especially for our feature film. Each story centers around a particular demonic entity, inspired by a wide set of influences, from the diabolical creatures of Pagan culture, to the infernal foes of religion, and the unnatural horrors of the cosmos.

Whatever you fear… rest assured, there is a demon here for you!

For We Are Many is produced by Kickstarter veteran Lawrie Brewster (Director of Automata, The Black Gloves and The Unkindness of Ravens) and Hex Studios in order to develop an exciting new horror franchise that provides opportunities to present the works of exciting up-and-coming horror filmmakers.

We intend to make ‘For We Are Many’ the first volume in a franchise of horror anthologies that explore different terrifying themes. Our first film explores the subject of ‘Demons’ which isn’t to say all our films are about possession! No… no…

For the idea of demons can be found in many religions, cultures and traditions around the world. So prepare for your introduction into a terrifying and diverse world of nightmares both ancient and modern.

In For We Are Many, we have a vast cast from around the world, each of them stars in their own right. However, to save you the time of reading about 100 actors and actresses I’ll cut it down to a few highlights!

Nicholas Vince plays our version of the ‘Crypt-Keeper’ with dark relish, whom you might recall starred in ‘Hellraiser’ and ‘Nightbreed’.

Eileen Dietz plays perhaps the most over-protective mother in the world, known also for performing as the terrifying ‘Pazuzu’ in the ‘The Exorcist’

We’re also proud to have Laurence Harvey, the impeccable character actor whom you might know as Martin from ‘Human Centipede II’ who in our film plays a very… very loyal butler.

And finally but not least, we have Hex Studio favourite, Jamie Scott Gordon (whom you may recognise from our last four Kickstarter films) returning once again, to play a man on the run from a dark… and perhaps inescapable fate.

We need your help to complete our film, a project that has the potential to grow into an exciting film franchise that creates continued opportunities for up and coming filmmakers around the world.

With your help we can complete our film to the very highest standard, we can then afford to manufacture our beautiful rewards, and the cost of marketing them to the widest possible audience.

We’ve all used our own money so far, but to complete our production we just need a little more help to ensure For We Are Many meets its full potential.

We’ve dedicated everything to creating fresh, exciting, and, above all else, original horror films, but because of this, we do struggle to get mainstream funding. The only way that these unusual, risky films get made and released, is with the support of fans like you. So, we sincerely hope you’ll join us on our exciting adventure, and help us to show the world that there is an appetite out there for original, edgy stories!

In return for your support, we’ll work tirelessly to produce rewards that you’ll be proud to own, and films that you’ll love to watch. Rest assured, every penny we get we’ll match with our own blood, sweat and tears as we devote ourselves to making For We Are Many a spectacular first step, in an exciting new film franchise.

The film is already in the home stretch. Once we meet our fundraising target, we will get straight to work completing the final draft – there is absolutely no chance that the film won’t get finished (barring perhaps a global apocalypse type scenario!). We’ve put a year of our lives into it already and we’ll be doing whatever it takes to get it done as soon as possible, and looking as great as it possibly can!

Then, as soon as the film is finished, we’ll get right onto producing all your rewards. We have a detailed plan in place for how we will do this. We can’t guarantee that we will make the delivery dates suggested on the rewards – for example, should we manage to snag an amazing distribution deal, we might have to wait a little longer before sending out the movie. But we CAN guarantee that we’ll do everything in our power to get them out on time and we will keep you in the loop throughout the process with plenty of updates. You, the funders, are our priority and we want you to have the best experience with us on this film. You can also get in touch any time with questions – we’re quite friendly!

(Please note that dollar amounts shown are approximate and might change slightly depending on the exchange rate.)