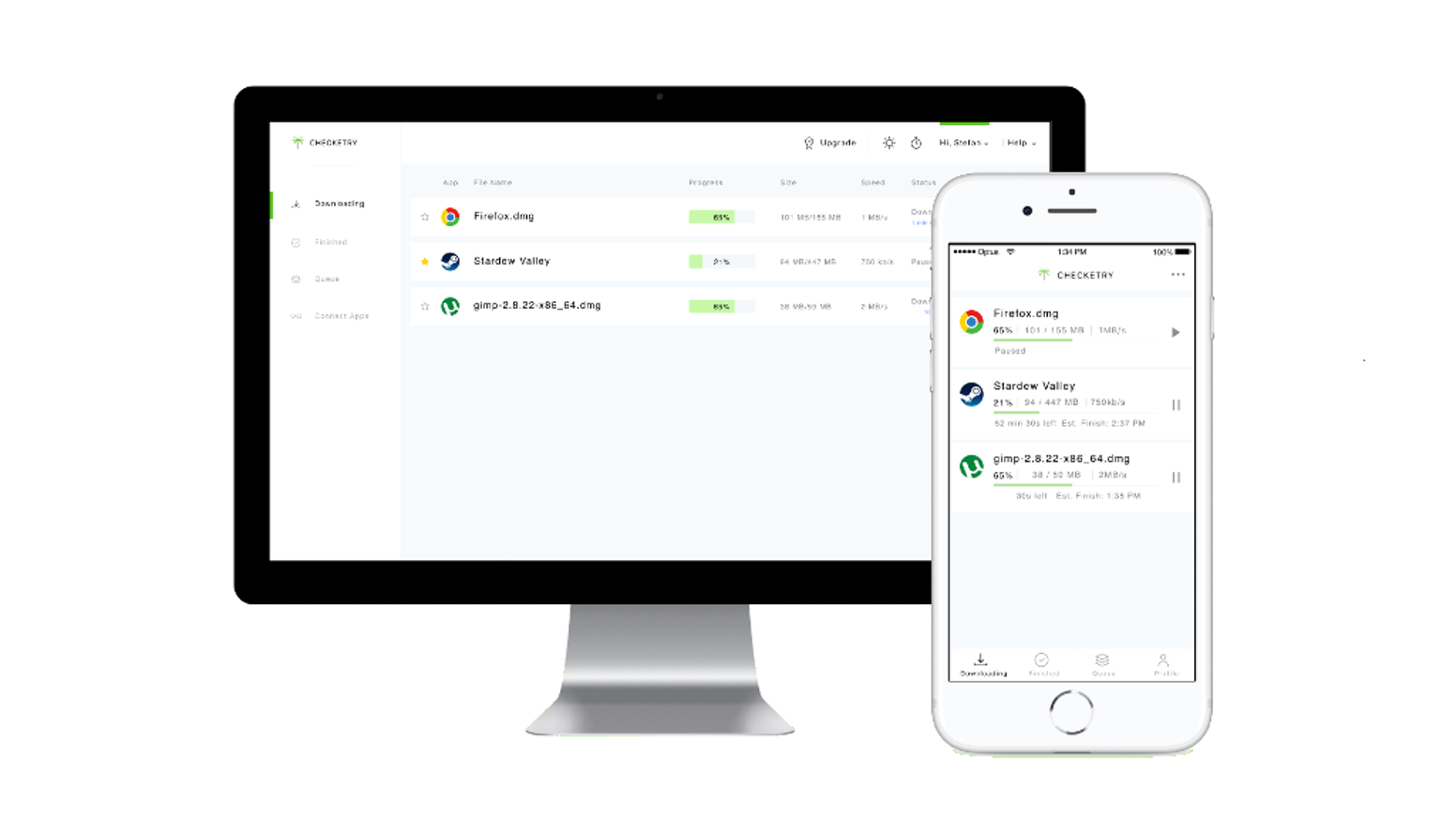 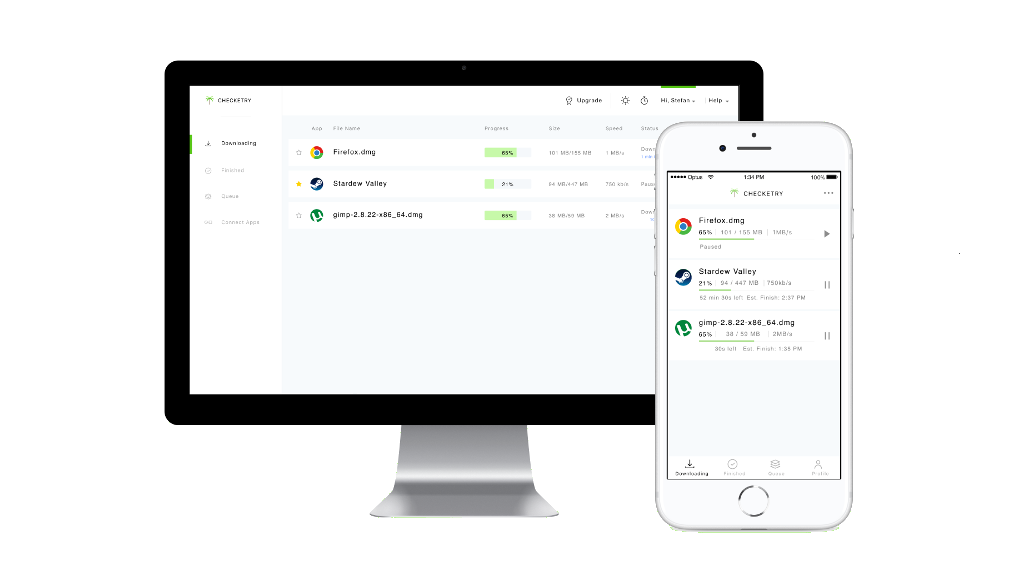 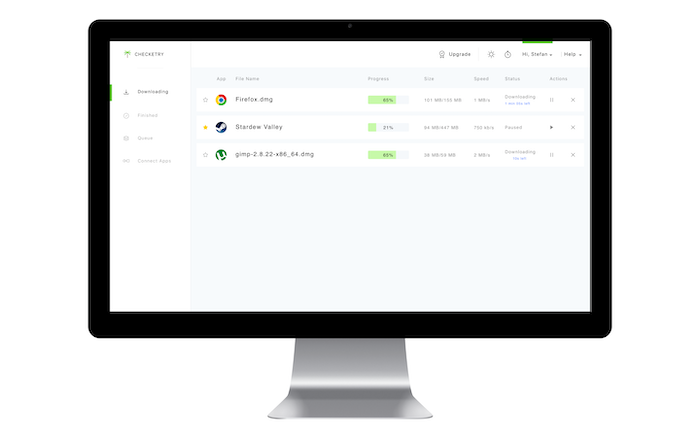 These photos and videos provide a detailed look at this project’s development.

What is a prototype?
View gallery
Design Prototype

A huge thank you from us, Checketry is fully funded! To further reward you guys we’ve added some stretch goals:

Tired of waiting for your downloads to finish? Slow internet speeds driving you mad? Want to know if your games will be done when you get home?

We’ll we had the same problems, so we built an app. Checketry helps take the pain and frustration away from downloads that seemingly take forever. More precisely, it is the download manager that lets users follow and manager their downloads for their computers all the way from their phone.

Checketry will be a free app for all devices (Windows, Mac, iOS and Android) with a premium version available to unlock all features and support us in further developing the app.

Via this Kickstarter, we are offering you special, heavily discounted offers for the premium subscription.

Full public release is planned for late May or early June, we’ll know an exact date the closer we get to launch.

Following this Kickstarter we will be running one final beta test to work out any final bugs/kinks along with gaining more feedback for launch. After we think it’s ready, we will launch the app publically for everyone to use. Currently, leaving beta for a public launch is planned for Late May/Early-June (we’ll have an exact date ready closer to launch).

Our target audience is anyone who hates waiting long hours for their downloads to finish and wants a way to follow the progress while they are at school, work or even just running errands around the house.

Personally, we’ve found that PC gamers tend to wait the longest as modern games are massive and a lot of people don’t have internet speeds that allows them to download them quickly. So if you play games on apps like Steam, Blizzard or EA Origin then you might find Checketry useful!

The idea of Checketry came to me (Stefan) when I was downloading FIFA 17 on my PC and I needed to wait over 20 hours for it download on my average Australian internet speed. Initially I left it over night but when I woke up in the morning my PC was turned off because I forgot to change the display settings manually (hence we added the sleep and shut down timer features!). So then, I had to wait during the day and like most of you, I didn’t have time to sit around and wait for it to finish. While the download was running I had to go to university and while waiting for class to start I was wondering how my game download was progressing so I started Googling on solutions and surprisingly found few options to follow download progress, especially for none Steam items. I thought that this could be a good idea for an app and began the concept development and later actual development of Checketry!

This is where your money will be going:

A lot of the risk has already been dealt with as we’ve finished most of the app, we are currently updating the user interface and adding some more features. We are currently in beta but we need your money to get us to a full public launch so everyone can start tracking their downloads with Checketry!

80% of the funding will go to development of the app with about 10% going to marketing/social media efforts and the other 10% on everything else (administration, server costs, legal, etc.).

Most of the basic functionalities are ready but further development is needed for:

Also, we’re sprucing up the interface from this…

(Designed by the wonderful Zhenya Rynzhuk)

You’d also be paying us stuff we need to live like food (don’t worry we won’t be buying lobster every night).

For kindly supporting us (❤️) we are offering limited time rewards and other great stuff like stickers and t-shirts:

Note: These rewards are shown in Australian Dollars (AUD or AU$). Rewards like the lifetime subscription won’t be available after this Kickstarter is closed so make sure you take advantage of these now!

Which means via this Kickstarter you can save significant money and get some exclusive offers like the lifetime subscription.

Why pay for a subscription?

You might be thinking, if the app is free why should I pay a subscription for it? With a subscription you can unlock all features of Checketry and by paying for the app you’ll be supporting us, the developers, in continuing to grow the app and add features.

Compared to some other download managers Checketry is actually more affordable as a few of them have no free versions and charge over $12 a year for a single device. Plus, they generally only work for browsers.

To date, we haven’t taken any outside funding and have been completely funding the app ourselves. Paying for a subscription allows us to keep going.

That’s okay! You can still support us by signing up for our waiting list and sharing the app with your friends. You will be able to earn some rewards by getting them to sign up for Checketry.

Note: If you have any apps or features you’d love to see in Checketry feel free to let us know! We take serious consideration into all feedback!!!

A big thank you from our team at Checketry!

This isn’t just a concept or even prototype; we have already had one closed beta test so we’ve removed a significant level of risk already because we know this works for users.

That being said there still are some risks and challenges involved. As with most software development projects there are potential risks in delayed launch times. We believe that we are well on schedule to release at our planned date but nevertheless something could come up that could push dates forward.

There is also some risk around maintaining app compatibility: we do use publicly available API’s and extensions so, for example, in the case that a company like Valve would suddenly remove their Steam API from public we could have some issues and would need to find a work around but we don’t expect this to be likely of happening.

We feel that shortly after this Kickstarter (if successful) we could easily to make it to a public launch and our team has over 30 years combined of software development experience in bringing products to market!