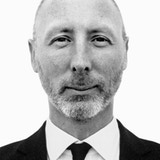 The first photobook with 400 images showing Josef Albers teaching at the Ulm School of Design. Most of them previously unpublished.

What’s this all about?

This project is about a book with 400 photos. These images document Josef Albers in his preliminary courses at the Ulm School of Design (Hochschule für Gestaltung, HfG Ulm), 1953-55.

A comparison: From all the other books published about Josef Albers – at Black Mountain College, at Bauhaus, and Yale – there are ca. 30 photos showing Albers in interaction with students and with other persons involved.

What kind of images are those?

The photos were taken between 1953 and 1955 by Hans G. Conrad. He was HfG Ulm’s first student. This is old school analogue photography, Leica, 35 mm, black and white.

The main idea behind these images is truly modern: The documentation of the making of a new life with new forms, new ideas, new technologies for a new society (after the end of the second world war). It’s not about the traditional ideology of uniqueness and the artist as a super hero – but it’s about transparency of the process of democratic exchange.

This HfG approach is the conceptual foundation of Conrad’s works: He didn’t arrange the one and only artistic »masterpiece« portrait in the old way. But he developed sequences of images that correspond with Albers’ sequences of interactions.

What do we see on these images?

We see Albers teaching and in interpersonal exchange with people like Otl Aicher, Inge Aicher-Scholl, Hans Gugelot, and Max Bill.

We see the students working at Albers’ tasks:

We see Albers showing the fine differences of human posture.

A sequence of images was taken when students produced a film about and with Albers teaching. (Sadly, this film has never been finalized.)

And finally we see Albers at the Ulm train station, surrounded by students together with Inge Aicher-Scholl and Max Bill, saying goodbye and leaving in summer of 1955.

Why are these images so valuable?

It is important to me that these 400 images are printed coherent and completely – not just a small selection. For a simple reason: When I show these images to experts from a variety of disciplines, all of them see different details that enrich their knowledge and help deepen their understanding of contexts and backgrounds.

We’re all experts in our small section, which we take a closer look at. These images contain a wealth of valuable information about the time, about the intentions of the people, about their actual actions, about motives and backgrounds. No single person can know all this. To preserve this knowledge, we need to merge the details. Then it will continue to provide valuable insights into things we do not even have in mind.

And why an expensive book? Digital publication might be nice, too.

Paper is truly a valuable storage of our cultural memory. What is stored on paper will outlive the generations. That’s why it’s important to me that all the images are merged and preserved in a book. And furthermore: Printed publication is the reason why Hans G. Conrad has shot them.

Finally, Kickstarter is a chance for smart production: If this book would be published in a traditional publishing house, 148 Euro per copy were needed.

Who was Hans G. Conrad?

His friends called him Cony. He was born in Switzerland, on 11 June, 1926. He was a perfectionist in terms of visual culture.

After World War II he got into contact with Max Bill, the Bauhaus-trained artist, architect and designer in Zurich. Bill asked Cony to join him and the Ulm team for developing the Hochschule für Gestaltung. Cony became HfG’s first student.

After his studies he worked at Braun (together with Fritz Eichler, google him). In 1962 he became head of international advertising at Lufthansa, and he assigned Otl Aicher to develop the corporate design which has reached legendary status. Cony was member of the board of design of the 1972 Olympic Games in Munich.  From 1970 to 1989 he was co-editor in chief of German magazine Capital – this was a unique position because he was responsible of the visual expression and the second editor in chief was responsible of the verbal expression.

Cony gave his works to me in the late 1990s. I got into contact with him when I wrote my dissertation thesis on the political history of the Ulm School of Design, 1953-68. He said to me that he trusted in me, and that I would do the right thing with his works (16,000 images, 1,200 paper works). Well, do the right thing, that was a burden.

Three years ago, I made the decision that I want to publish most of his images in books structured according to his groups of work. One group focuses on Josef Albers, for example. Another one focuses on Max Bill; on Otl Aicher; on Tomás Maldonado; on Hans Gugelot; on Friedrich Vordemberge-Gildewart; on Konrad Wachsmann; on HfG guests like Walter Gropius, Mies van der Rohe, Norbert Wiener, or Charles and Ray Eames; etc. – I want to start this series of printed publication with this first book on Josef Albers.

I studied history, German language, and communication studies in Munich and Cologne. In the late 1980s I worked together with Otl Aicher for the Italian company durst. I published several books and essays on design and related topics. Since 2015 I’m earning a living as Professor of Design Theory in Cologne, Germany. The main focus of my research is the designers’ societal responsibility and the future of design education. And yes, I must admit it: I‘m a little bit mad about the history of the Ulm School of Design.

Typography and design of the book: Petra Hollenbach

I’m quite experienced with the creation and production of printed publications. I’m working together with a bunch of specialists for Graphic design (Petra Hollenbach), translation (Gérard Goodrow), etc. This is why I don’t see any risks.