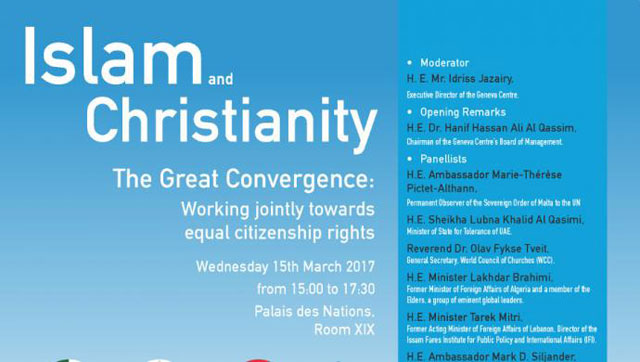 Long decades of violence in the Middle East and Northern Africa, resulting from the proliferation of international and local conflicts, have strained the social fabric that once held peaceful Arab societies together, says a Geneva-based think tank promoting global dialogue.

The resulting power vacuum has provided fertile ground for the emergence of terrorists group advocating a distorted view of Islam in an attempt to access power through violence exercised against Muslims, Christians and other religious minorities, adds the Geneva Centre for Human Rights Advancement and Global Dialogue (GCHRAGD).

“This situation has had a spill-over effect affecting also the West and other regions in which the disruptive effects of globalisation, and the growing disengagement of political elites from the concerns of ordinary people, have given rise to a populist tidal wave.“

According to the GCHRAGD, the emerging populism has a strong xenophobic component. Societies are prey to the growing polarisation created through manipulation of religions and beliefs. “The disruptive effects of globalisation, and the growing disengagement of political elites from the concerns of ordinary people, have given rise to a populist tidal wave” – The Geneva Centre

“The rise of far-rightist populist movements goes hand in hand with the political instrumentalisation of religions, which exacerbates divisions and incites hatred and violence. While Islam and Christianity are vectors of peace, their malevolent manipulation seeks to accentuate alleged differences and depict them as incompatible and opposed to one another.”

The Geneva Centre has repeatedly consistently addressed issues related to the rise of xenophobia, extremist violence, racism and discrimination with various partners.

This way, it organised, in 2016, a series of conferences on themes related to “Islamophobia and the Implementation of UN Human Rights Council Resolution 16/18: Reaching Out”; “De-radicalization or the Roll-Back of Violent Extremism”, and “Muslims in Europe: The Road to Social Harmony”.

Notwithstanding the relevance of the topics, some participants pointed out to the Geneva Centre the necessity of broadening the debate to not only include Muslim minorities in Europe, but also to take into account other religious minorities affected by the current environment of tension and incitement to hatred.

In this regard, the GCHRAGD has planned to organise a side-event on the theme of “Islam and Christianity, the Great Convergence: Working jointly towards equal citizenship rights”, scheduled for 15 March, in relation to the 34th ordinary session of the UN Human Rights Council. The objective will be to study the “alternatives to identify a common strategy that addresses the issues of religious discrimination, fanaticism and xenophobia,” which have worsened in several countries in Europe, Asia, Africa, the Middle East and North America.

According to the organisers, the goal will be to highlight the many convergences that exist between Islam and Christianity, to recognise the potential of a “great convergence” between both religions, and to mitigate and to reduce the marginalisation of religious minorities, discrimination, xenophobia and the resulting violence.

This debate could then be the starting point for a larger conference, which identifies common commitments to dialogue, tolerance and non-discrimination, announce the organisers.

According to the Geneva Centre, “some high-level politicians are trying to oppose Islam and Christianity and express concerns about the plight of minorities affiliated to particular religions.”

The planned initiative aims at restoring globality to the debate taking into account the need to empower all minorities so that the very notion of minorities ends up dissolving into the broader and more inclusive concept of equal citizenship rights.

“It is fortunate that this agenda is bringing together some of the most senior representatives of the body politics, the religious leaders and academics from the Christian and the Muslim regions alike.”

GCHRAGD is an independent, non-profit, non- governmental organization dedicated to the advancement of human rights through consultation and training with youth, civil society and governments.