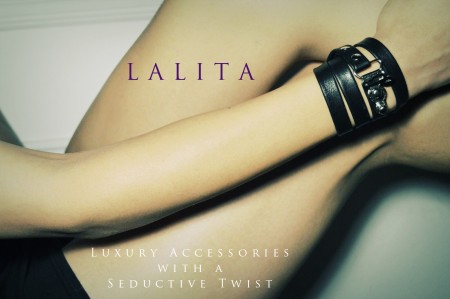 Los Angeles, CA, September 1, 2015 – Los Angeles based lifestyle accessories brand, Lalita, launched their Kickstarter campaign on August 20th for funding to bring their first collection to market. The brand was created by Brown graduate, Rena Andrews, who combined her love of lingerie, pole dancing, and female empowerment into a line of luxury accessories with a seductive twist. The campaign has already gotten celebrity attention from Felicity Huffman who tweeted, “Check out the sexiest kickstarter around!” and Jennifer Grey and Lindsey McKeon who both tweeted after supporting the campaign.

Lalita is seeking to raise $25,000 by September 17 for their funding campaign. During it’s soft launch Lalita has already been featured in celebrity & fashion photo shoots, walked the Red Carpet at Comic Con 2015 on actress Christina Moses, a lead in CW’s upcoming show Containment, and graced the ears of the Kate Upton in her upcoming film, The Layover, directed by William H. Macy.

Their kickstarter video features diverse women declaring the tagline #IownIt, signifying not only their Lalita accessories, but ownership of their own body, sensuality and sexuality. Rena stated, “I created pieces for the boardroom to the bedroom, beautiful tokens for you to look down upon and remember how incredibly powerful you are when you own everything that makes you. . .you.”

To further the brand message of female empowerment and ownership, Lalita will donate a percentage of their profits to a non-profit for survivors of sex trafficking because “we believe that owning your own body should be a fundamental right, and not a privilege.”

A voiceover introduction features quotes from interviews from women on what the brand has inspired in them; the interviews are also being released throughout the campaign. One supporter says, “The fact that we can give ourselves the kind of gift that brings us more sensation is huge.” And another exclaims, “This line, it just allows you to love the way you look, in a way that’s innate to our essence as human beings.”

Rena designed seductive pieces that can be worn day and night. Many pieces, such as the Lalita tassel earrings can transform from simple day pieces to elegant night pieces with the addition or removal of the sterling or leather tassels. The Lalita waist cinchers can be worn as stylish belts, the garter tanks that are being introduced for the campaign have interchangeable straps for 16 different looks and the Lalita HerCuff double bracelet hints at possibilities with it’s sterling connector chain.

The first line was inspired by Rena’s grandmother’s vintage garter clip. She not only saw the simplicity and beauty in the clip, but also in the time period where “the slightest gust of wind could excite the imagination.” Rena has integrated the clips into bracelets and anklets with soft Italian leather and sterling and a signature closure with the clips. For the Kickstarter campaign, Lalita will also be introducing Vegan leather options.

Kickstarter campaigns operate under an “all-or-nothing” funding model so if the Lalita project doesn’t reach its goal then they will not receive any funds raised. To follow their project, be sure to find them on Twitter (@LalitaWhoPlays) and Facebook and spread the word to your social media networks.  Any contribution will help their project come to life and to inspire more women worldwide to say #IownIt!

Visit www.KickstartLalita.com for more info and a link to kickstarter to support their campaign. As a Dalai Lama quote on Lalita’s campaign page says, “If you think you are too small to make a difference, try sleeping with a mosquito.”

If you’d like more information about the Lalita Project, or if you’d like to schedule an interview with Rena please email kickstartlalita@lalita.com or send them a tweet @LalitaWhoPlays.

Rena Andrews is a graduate of Brown University where she was part of their prestigious Program in Liberal Medical Education and had planned to focus on women’s health as an MD. In lieu of Medical School, Rena opted to take the entrepreneural route and founded a Los Angeles based tutoring company, The Andrews Advantage. Throughout her many years of teaching she helped hundreds of students across multiple subjects. Her passions outside of work included photography, graphic design, dance, and acting. Lalita brings together all of her experience as an entrepreneur and teacher while incorporating them with her creative pursuits and hobbies. During the launch of Lalita, Rena has served not only as creator, designer, and CEO, but also as production manager, graphic designer, photographer, model, website designer of Lalita.com, Social Media manager, writer, and editor.